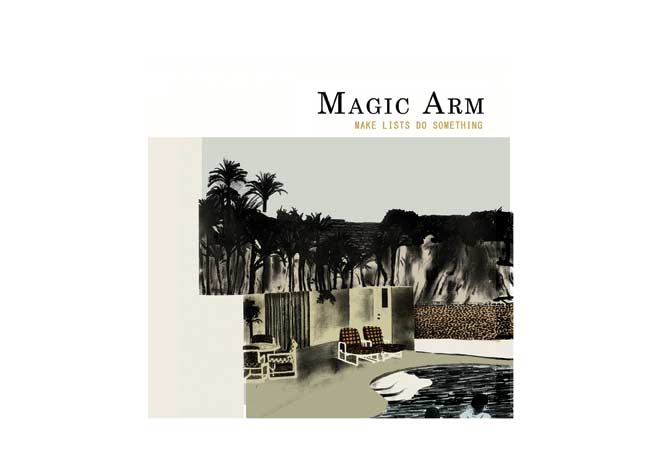 Make Lists Do Something is the debut album from Magic Arm and features the singles ‘Bootsy Bootsy’, ‘Outdoor Games’ and ‘Widths & Heights’

Magic Arm – who, in 2009, you will see erroneously described as a singer-songwriter; laptop-folk troubadour; and more – is otherwise known as Marc Rigelsford. Like Beck, Beta Band or Adem, Magic Arm is a sonically curious soul who fuses folk, rock and effervescent electronics. But, as reference points, none of those three quite hit the spot.

Magic Arm was born in Rustington, West Sussex but now lives in Manchester (he studied photography at University there). Previous musical projects include the band Escape Pod, who once put a 10″ out on XL offshoot, Rex. Marc claims that he only started making music as Magic Arm in order to help out a film-maker friend who needed some soundtrack music, quick smart. In truth, Magic Arm has spent years painstakingly forging his sound. He plays all the instruments (drums, keyboards, guitars) himself, and has laboriously taught himself how to use Pro-Tools and such, in order to create music that, refreshingly, defies easy categorisation.

It helps that so little (outside of the Beach Boys and “early” McCartney) has obviously influenced the Magic Arm sound. You might expect him, given his love of bleeps and farty electronic squelches, to be a big fan of everything from Kraftwerk to Autechre. Not so. “Buying a Yamaha CS-10 in Cash Converter was the biggest influence on my sound,” he says, dryly, before talking about his love of Gwen Stefani, Dizzee Rascal, Peaches and Gnarls Barkley. “I’m literally trying to write pop music,” says Marc, “but it never comes out that way. There’s always a dark edge to it.”

Quite. On the album, Magic Arm’s smart update of an old Leroy Carr blues song, ‘Six Cold Feet Of Ground’ (which he turns into a desperate, hurtling, computerised gabbled plea for forgiveness), appears alongside songs called, darkly, ‘Sound Of The Night’ and ‘Rested Bones’. “What can I say?” says Magic Arm, trying to dodge the question. “I’m a moody Cancerian.” Listen closely to the ostensibly larky singles ‘Bootsy Bootsy’ (“Inside everyone, I hear the end, and that’s ominous.”) and ‘Widths & Heights’ – a “bitter” love song – and behind that brash folk-pop exterior, there is clearly trouble at the emotional mill.

Not that Magic Arm will explain why, or reveal many of the close biographical details which inspired these songs. In an age of emotional incontinence, he is wary, uncomfortable with the idea of explaining himself to strangers. He can articulate vulnerability in song; but, in person, he needs to keep those songs at (Magic) arms’ length. “I find lyrics difficult. I can spend hours and hours over one line. ‘What am I giving, or not giving, away here? Do I sound like an idiot?’ You’re right, on the album, there’s a lot of happy music undercut by sentiments that are quite bleak. But isn’t that how music should work? It should fool you, slightly.”

He is reticent to spill, you suspect, precisely – and slightly ironically – because he feels the songs so keenly. “I want to move people emotionally. But, primarily, I want to move myself. For me, writing the songs is emotionally cathartic.”

Whilst such ambitious projects often shine in the studio, on the stage many a 21st century one-man-band has come unstuck. Not so Magic Arm. Early solo performances led Samuel Beam of the much loved Iron & Wine, to hail Marc “the master of the loop pedal” and he wasn’t wrong. More recently though Marc has abandoned this tricksy bit of kit and has been taking to the stage with a real live band. No longer focussed on layering up live-sampled layers of sound, the Magic Arm live show has a new passion and energy that give the songs a life beyond the recordings.

So much music is safe, predictable, a commodity, but Magic Arm is here to remind you that it can still be liberating, messy and powerful. Radio 1’s Zane Lowe and Huw Stephens, and Marc Riley, are already fans. He has supported the likes of Beirut, Iron & Wine and James Yorkston. Steve Lamacq declared Magic Arm’s Glastonbury festival debut a “highlight”, while the Manchester Evening News have dubbed him: “The most innovative and sparkling new musician in the city.”

Magic Arm’s early singles were released on Switchflicker – the label that launched The Ting Tings – but now this Manchester independent has joined forces with the esteemed Peacefrog (José Gonzalez, Findlay Brown) to help ensure that Magic Arm gets the breaks he so richly deserves. Rest assured in 2009, Magic Arm is going to make a lot of new friends.