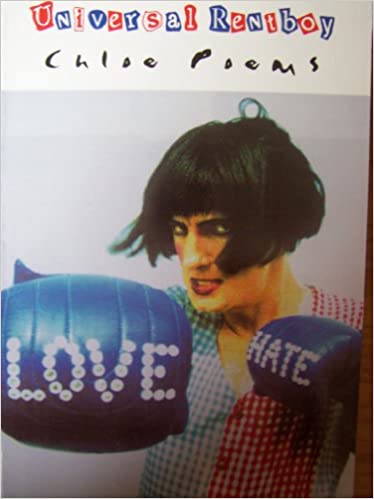 Chloe Poems first appeared in “The Beige Experience” – a Liverpool based cabaret double act in the late eighties. Born again, a fully rounded, impassioned visionary in gingham in 1993, Chloe has since followed her emotional mission to make the world a better place.

Chloe has toured nationally over the last 7 years with her full length theatre shows, Knockers, Chloe Poems Healing Roadshow, Universal Rentboy, Kinky and ME. Frequent hits at the Edinburgh Festival, these shows toured up and down the country, from Aberdeen (where Chloe was Cover Girl for Miss Alternative Aberdeen), to Portsmouth.

A stalwart of both the cabaret and poetry circuits, Chloe has performed and hosted a diverse range of events, from hosting Gay Pride in front of 100, 000 people, to running her open mic monthly poetry night WordUp (come and have a go if you think you’re bard enough).

Personal highlights of her career include performing at Manchester’s Mardi Gras Festival Closing ceremony in front of 20, 000 people, and performing her epic poem The Effeminate at Quentin Crisp Tribute’s night, which led to Chloe being invited to Mr Crisp’s funeral.

Having just finished a year as Resident Artist at the green room, Manchester’s centre for performance art, she has become the champion of the Manchester poetry scene. Slam Bam Thank You Ma’am, her first regular poetry slam helped establish her as the queen of performance poetry in the city, and enabled her to encourage other poets to just get up there and give it a go. Chloe is now regularly asked to guest at poetry events around the North West, as well as appearing in London and the South, often with fellow performer The Divine David who she collaborated with to perform The Ugli Sisters, selling out at both the Royal Exchange, Manchester and the ICA.

Her anthology Universal Rentboy, was published in 2000 by The Bad Press and is available in all good book shops. Her second book, Adult Entertainment will be available through Route Publishing in July 2002.

The poetry of Chloe Poems is coated in audacity. It is rare that a collection can be described as groundbreaking with any real sense of authority or truth. For a poet to capture the empathy of others is sadly rare, but to achieve this feat whilst ensnaring those thoughts which most entertain but are seldom expressed, is almost unique. In defiantly unshockable times, Ms Poems manages to make jaws drop with remarkable ease. One would expect little less from Britain’s first gay socialist transvestite poet and radical agenda bender. Described by The Independent as “all the pugnaciousness of a prize fighter”, and by Gay Times as “a massive rising star of enormous talent”, – outrage has rarely been so perfectly crafted and delivered by such a deliciously gingham-clad glove.

Chloe Poems has had three sold out releases on Switchflicker records

Switchflicker is an independent record label that has been supporting innovative new talent in the Northwest since 1999. Switchflicker was originally designed as a 7″ Vinyl project pulling together artists to create new experimental work. Switchflicker was born from the infamously informal Club Brenda performance / club nights of 99.