We’re delighted to be helping Magic Arm unveil his new album Images Rolling – our first concert in the Baronial Hall at Chetham’s School of Music!

Following 2009’s debut album Make Lists Do Something, Images Rolling is a further exploration of the musical playground that is Magic Arm’s world. Somewhere between ‘This Way Up’ cardboard boxes and the stairwell in which the new record’s violin and trumpet sounds were recorded, a studio gradually took shape in Marc Riglesford’s – aka Magic Arm – new house.

Boasting an array of cables, switches, and instruments donated by friends and family such as a piano, guitar, bass, synths, keyboards, glockenspiel, various types of organ, and drums, Rigelsford’s new sound workshop offered the perfect balance between vocational artistic freedom and a chaotic living space; ‘Tripping over your instruments on your way to the kitchen is a constant reminder that there is something else that you should be doing,’ he confesses.

‘The master of the loop pedal’ – Samuel Beam, Iron and Wine

Limited edition vinyl of Images Rolling, as well as CD copies, will be available to purchase on the night, ahead of the album’s official release in June.

Support comes in the form of The Leaf Label’s Nancy Elizabeth. Nancy will be performing a rare solo piano set, including material from her forthcoming album, Dancing. 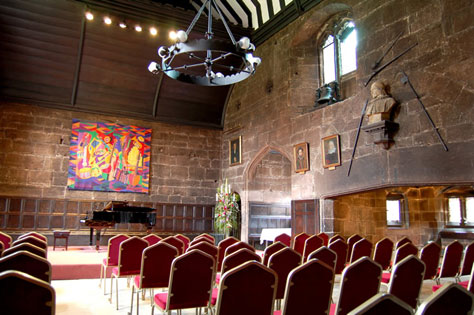 This hometown album launch show takes place in the unique surroundings of Chetham’s School of Music’s Baronial Hall. Dating back to the 15th Century, it is one of the city’s oldest surviving buildings – a venue rarely used for public concerts.